What is ‘Preserve Bluewater Bay’, and What Do They Want?

“You know what’s coming… This is your chance to do something,” Justin LeMire told a group of about 125 Bluewater Bay residents at a meeting that took place on Saturday, January 29th, that discussed the group he helped found – Preserve Bluewater Bay, LLC.

RELATED: Golf is Gone – Offices + Assisted Living Facilities May Be Neighbors in the Near Future for BWB

In August of 2021, an emergency meeting was called by the attorney for Bluewater Bay Development Venture (BBDV), which currently owns the land The Bay and The Marsh golf courses sit on, with The Men’s Golf Association (MGA) board. The MGA was told The Bay nine-hole course was going to be closed and would potentially be developed. This would mean that a single course would remain of the original four courses in Bluewater Bay – the nine-hole course known as The Marsh.

In response, LeMire and four others started an LLC – Preserve Bluewater Bay (Preserve BWB) – to work toward buying The Bay and The Marsh golf courses with a mind to keeping them as golf courses or otherwise preserving them as green space. While it might not be golf courses that occupy the space in the future, the founders of Preserve BWB said they want to ensure the land is not developed.

Preserve BWB financially committed, with a letter of intent and a $25,000 deposit, to purchase the land that makes up the golf courses left in Bluewater Bay. They will start with a two-year lease-to-purchase on the land from BBDV for $1 on March 1st. Once the two-year lease-to-own begins, they will have the option to purchase the land the courses sit on outright. While Preserve BWB leases the land, they will be responsible for paying salaries for employees, insurance and day-to-day operations of the course. Therefore, they need to raise a total of $250,000 before their lease on the land begins. If they fail to raise this money, the whole deal could collapse.

If Preserve BWB can raise the money within one year to purchase the land from BBDV, it will cost $2.2 million. If it takes the group two years to raise the money, it will cost them no more than $2.4 million. The purchase would include The Bay course, The Marsh course, the maintenance shop, equipment used to care for the land, and several of The Lakes course holes (1,2 and 3) which are currently closed. The clubhouse would not be a part of the purchase as it stands, according to Preserve BWB.

“This is Not About Golf; This is About the Preservation of Green Space”

“Golf is a means to an end,” LeMire said to the assembled residents. “We want to make sure that we have green space.” According to the terms of the two-year lease with BBDV, Preserve BWB will have to use the land as a golf course; however, if they raise the money to purchase the land outright, they will be allowed to use it as either a golf course or other recreational uses such as pickleball courts, walking trails, green space, frisbee golf or other things of that nature.

Preserve BWB has a stated aim of avoiding a worst-case scenario where a national-level builder puts “cookie-cutter houses” on their collective doorsteps. Preserve BWB believes that without intervention by current homeowners, a national builder could buy up the land and ‘cram houses’ into the space currently occupied by the golf courses. 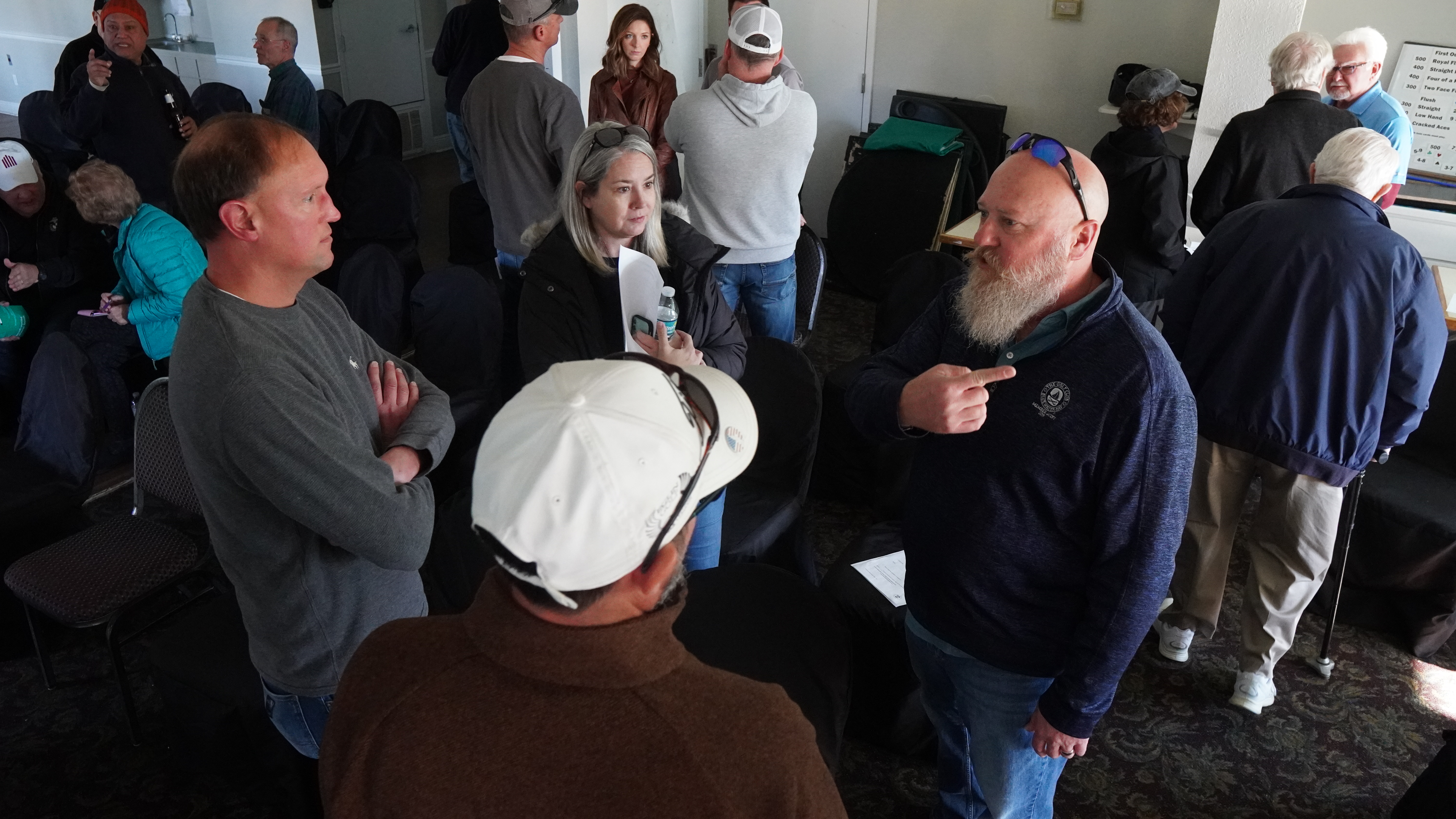 Rules outlined in the Development of Regional Impact (DRI) guidelines govern the use of the land now known as Bluewater Bay. Those rules allow any developer to build much more dense housing on the land where the golf courses now lie. Currently, the DRI allows for a little over 4,000 homes to be built in Bluewater Bay. According to Preserve BWB, there are currently about 3,800 homes in the area.

“The bottom line is, they can [build],” LeMire said. “They can build condos here tomorrow up to [the zoning limits established by] the DRI.” He added later that he isn’t aware of any current plans to specifically build additional condos other than what has already been approved. “Can they get the DRI expanded? Absolutely. They can go and petition the commission of Okaloosa County [who could vote to give a developer permission] and expand it.”

LeMire believes that the military has a stake in the future of the current golf course as well; he notes there is an affordable housing shortage in Niceville, Bluewater Bay and Valparaiso. “There is no affordable housing, just for reference, for young airmen and young officers,” LeMire said to the group. “I was at Eglin Air Force Base – I’m retired – I was one of the senior leaders out there. There are no affordable homes. They all drive from Crestview, DeFuniak, Freeport, Navarre to come and work at Eglin. It’s not going to take long for leadership at Big Air Force, in my opinion – just my opinion – to start putting pressure on the senators to start putting pressure on the local governments and say ‘well, you need to open this up, so people can drive ten minutes to work, instead of an hour and a half.’”

“Randy Wise [the developer] is getting other big-box builders knocking on his door to buy [the remaining land that The Bay and The Marsh currently sit on]… If you go out to Shoal River, the golf course up there – a beautiful clubhouse is leveled now – and D.R. Horton Homes [have taken their place], basically one track home after another,” said David Rauch – another one of the board members of Preserve BWB.

Preserve BWB brought in an outside golf consultant from St. Louis to determine the viability of keeping the courses.

The consultant worried that the courses might not survive with all 18 holes due to the supply of and demand for places to golf in the area. There are numerous courses on the ‘supply’ side of the equation. For starters, there are plenty of courses in Destin and South Walton. On the north side of the Mid-Bay Bridge, the Bluewater Bay Courses compete with the Rocky Bayou Country Club and Eglin’s Golf Course located in Niceville. Finally, other courses further north in DeFuniak Springs and Crestview fill out the rest of the competition for golfers.

The golf consultant said that if the people of Bluewater Bay want to make a go of it – they need to raise about $250,000 to keep in the bank for salaries, maintenance, or repairs.

Preserve BWB’s leadership is working to beat a March first deadline to raise $250,000 to shore up capital to help run the golf course – cover initial expenses for salaries, maintenance, and repairs. The deadline is married to the date when Preserve BWB would have to decide whether or not to move forward with the lease-to-purchase. Should they not gather enough money, the group will choose not to move forward with the venture.

Starting the lease-to-purchase and raising the initial $250,000 are the two prongs of what Preserve BWB’s leaders consider Phase One – staving off the immediate sale or development of the 120+ acres currently taken up by the two nine-hole golf courses.

Phase 2: Paying for the Dream

Once the lease starts on the property at the beginning of March, the option to buy the land will be on the table. In theory, someone could hand them the money to buy the course outright on March 2nd and they would be able to purchase it then.

So – if they can purchase the land, how would the people of Bluewater Bay pay to maintain this green space?

The five men on the board of Preserve BWB want to attempt to pay for upkeep with monthly dues from the 42 HOAs and 26 non-HOA communities in Bluewater Bay. They estimate that if they can get most of the HOAs on board and charge their residents $25 per month to preserve the green space, they would generate $1.14 million per year for maintenance. “That’s the money we would have before a single round of golf is played,” LeMire said. For example, LeMire brought up one HOA in Bluewater Bay, Southwind. Currently, Southwind collects dues from its members to pay for the golf courses.

The group also briefly discussed the Bluewater Bay Municipal Services Benefit Unit’s (MSBU) potential to take over the area and bring in tax revenue to pay for the green space’s upkeep in perpetuity.

A reality where HOAs have banded together to pay for the preservation of the green space is a ways in the future. So is the potential for the MSBU to tax residents to pay for upkeep.

In the meantime, Preserve BWB plans to push hard for golf memberships and donations as a way to keep the course open and funded – hence, Saturday’s meeting was to inform the public and solicit them for financial backing to make the plan a viable one.

As of right now, the group is looking to raise $5,000 from 15 or so more residents to meet their initial fundraising goal deadline.

If you are interested in speaking with the group leaders, you can email them at info@preservebwb.com.

They also have a Facebook Page. They are currently working on a website that will provide more information and allow supporters to donate.

We’ll be following along as the story progresses – stick with Mid Bay News for regular updates as they become available.