The Latest, Greatest Threat to Public Safety in Okaloosa County

It’s the price of housing.

Homes and apartments in Niceville, Valparaiso and the rest of Okaloosa County are quickly becoming out of financial reach for local law enforcement.

Basically, it is getting to be nearly impossible to recruit deputies to Okaloosa County law enforcement agencies because they can’t find anywhere to live.

But the sheriff and a local economist both agree – it’s potential deputies’ inability to find an affordable place to live that will do the most harm to public safety soon.

Recruitment Was Already a Problem Before Housing Prices Shot Up

Deputies are hard to create.

Before becoming a deputy, individuals have to take an eight-month course that costs $3,500. Then they have to complete four months of in-field training before they become a net positive to the agency that hired them.

A non-zero number of those deputies will decide that the isn’t the job for them and quit during the four months of in-field training.

Add in promotions, retirement, and people taking jobs at higher-paying agencies – and it’s simply hard to keep deputies out protecting the streets here in Okaloosa County.

Skyrocketing housing prices can seem like an impossible challenge for law enforcement agencies.

So, deputies are a scarce resource. It is a resource Sheriff Aden and other sheriffs around the state and country want to preserve at all costs.

That’s why Sheriff Aden was just one of several who attended the police academy graduation at Northwest Florida State College (NWFSC) on March 7th. Going to the graduation is partly about showing support – but make no mistake, it’s also a recruiting trip.

RELATED: Want to be an Okaloosa County Sheriff’s Deputy? Here’s how to apply.

Of the class that graduated from NWFSC, five cadets will soon join the Okaloosa County Sheriff’s Office ranks. “It’s a show of solidarity among law enforcement agencies. It’s also a show of the need to have a face-to-face with the recruits that we don’t already have on our books. [We want] to come and shake their hands and show them how proud we are of them and hopefully win them over to our agency,” Aden said about the graduation.

If Sheriff Aden is lucky, the new deputies will be permanent additions to the force. Not everyone who passes through the academy stays past their probationary period. But those who remain have plenty of community support.

“There is no better place to be a cop in the United States of America than right here in Okaloosa County,” Aden said. Despite the community support, the agency – which is allocated funds from the county for 335 full-time deputies – is 13 deputies short of full staffing, even after bringing on five recruits from the March 7th graduation.

Getting people into the pipeline in the first place is one problem. Tuition, plus eight months away from family while taking classes, adds to the problem as time away from family is a big ask for about $43,000 per year plus benefits, Sheriff Aden says.

To fight that problem – he asked for, and the Okaloosa County Board of County Commissioners Approved – a cadet program. The sheriff hires new recruits as civilian employees after passing their background and other assessments. The OCSO gives them a job in the Sheriff’s Office and pays for them to go to the police academy instead of their bonus. Their job is to go to school full time.

“We are going to have to make some moves [like the cadet program] to try and attract people into this career field; otherwise, we’re not going to have enough people to man our streets,” Sheriff Aden said, “Back in the day, they would talk about how people in south Florida paid more, but the cost of living was more. Well, you can’t say that now. We have one of the highest living costs [in Okaloosa County] in the entire United States now, short of California.”

The simple truth is that even with all of the incentives – it’s still pretty hard to live in Okaloosa County on about $43,000 for one reason – housing costs.

According to Dr. David Goetsch, a local economist, it is about as impossible as it gets for a working-class family to buy a house right now. 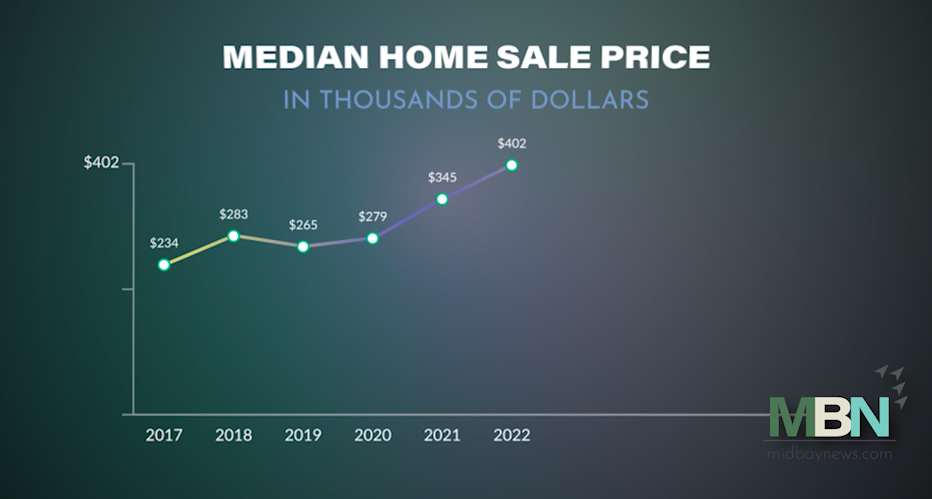 “Working-class salaries have not gone up, but inflation is running at 7.5%. So not only have working-class families’ salaries not gone up – but they have declined by 7.5% because everything you have to buy costs more,” Dr. Goetsch said. Okaloosa County Sheriff’s Deputies base pay has increased from $37,502 in 2017 to $43,804.80 in 2022 – a 16.8% increase over 5 years, which basically has kept pace with inflation. 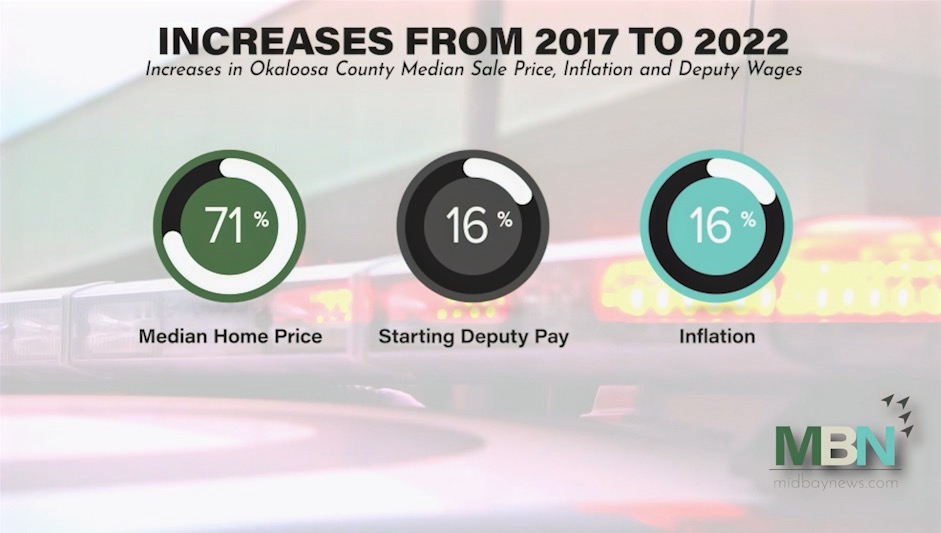 Housing prices in Okaloosa and Walton County have skyrocketed in just the last five years. Like, in the neighborhood of 50%, soared. According to the Emerald Coast Association of Realtors, in 2017, the median home sale (that way, we don’t pretend like everyone will have a beachfront condo in Destin) for our area was $292,000 – already outside of the reach of many sheriff’s deputies. In January 2022, the median home sale value was $402,000.

The Folks at Nerdwallet.com suggest that you should not spend more than 28% of your monthly income on a mortgage. 28% of a sheriff’s deputy’s income in Okaloosa County is $1,022.11. According to the Nerd Wallet people, that puts a single deputy with a 20% down payment in the neighborhood for a home worth about $170,000. As of Saturday, March 19th, there are 15 homes listed on Zillow (of the several hundred listings) available at that price point. Only one home is south of the Eglin Air Force Base reservation. None of them are in Niceville, Valparaiso, or Bluewater Bay.

According to Sheriff Aden, the apartment situation is no better. “When one-bedroom apartments are rented for $1,200, you can’t afford to live like that if you have a family or two or three and live off $43,000 per year.”

It means that we are facing a shortage of deputies due to the high-priced housing market in Okaloosa County. “We have people that were raised here and are moving off and are cops for 20 years. Then they look at coming back home, and 90% of the time that they decide to pull their application the only reason that they cite is that they can’t afford to live here.” Aden said.

Therefore, the sheriff’s office has to come up with a solution to get deputies affordable housing. “There is a way to make this happen. Here’s the problem, we keep raising and raising salaries, which is fine with me, but the fact is that we can’t keep up with housing costs. And if they can’t buy a $350,000 house, they have to go rent an arguably lower-quality home for the same payment,” Sheriff Aden said.

RELATED: 900 Square Foot Affordable Homes in Valparaiso? It Could Soon be a Reality.

He says that one of the scenarios he can see for his line-level deputies would be a barracks-style living situation.

It’s a scenario that Dr. Goetsch says isn’t ideal – but may have to work.

“You are then having to use taxpayer dollars to pay to house people who are public servants in the community. And that should never happen,” Goetsch said. “I commend the sheriff if that is what he is looking to do. It’s a shame that we have gotten to a point where the sheriff’s office has to get involved in building housing just to hire deputies.”

Can We Build Our Way Out Of Okaloosa County’s Housing Woes?

The beaches are in Destin and Okaloosa Island. Still, due to the geography of Eglin Air Force Base, everything to the south of the Eglin Air Force Base reservation is like a series of islands. If there is one thing that’s obvious about islands, there just isn’t a lot of real estate.

Add in the rising costs for land in northern Okaloosa County – and it’s becoming a seller’s market everywhere you look. And the sellers can sell for more due to demand. Even so, we cannot build our way out of the housing crisis – according to Dr. Goetsch. “There’s two problems in Okaloosa County,” he says, “First, the rising price is putting houses out of the range of people who are middle class – working people. The second is we are very limited in Okaloosa County, just in terms of where you can build. We are at the point where, in Okaloosa County, we are in redevelopment instead of development. What I mean by that is there are not that many places to put new houses. The dirt has been used up and we are surrounded by Eglin Air Force base and the reservation. So we don’t have the places to put the new houses, so what you have to do if you want to build a new house is you have to knock down an old one.”

Building affordable housing will take place in one of two areas in the Mid Bay area. The first is Valparaiso. “Val-p is a perfect place for redevelopment. You are beginning to see a little bit of it, but it will soon take off,” Dr. Goetsch said.

The second area is the older part of Niceville.

Here’s the deal: Okaloosa County faces a shortage of sheriff’s deputies. Not as bad as some other agencies where the public has a more dim view of law enforcement, but it is still short manpower.

The long training time with high personal cost to the potential deputy has many shy away from the profession. Include the fact that you won’t get rich doing the job, will probably work nights at some point and there’s a decent chance you might get shot at, and people are not exactly lining up out the door to take the job.

In addition – inflation has been a doozy and means that becoming a sheriff’s deputy will at best let you keep up with the standard of living you had previously – which we discussed isn’t going to be filled with Lamborghinis and private yachts.

The single-largest roadblock to recruiting new deputies, though, isn’t any of those factors. It’s the cost of housing. Deputies’ salaries preclude them from purchasing homes in much of the county. And the homes they are able to buy are either in remote parts of the county or could be considered substandard.

According to Sheriff Aden, the unaffordability situation has actively contributed to people pulling their applications to work for the Okaloosa County Sheriff’s Office.

But the situation is not hopeless. The Sheriff’s Office is looking at workforce housing situations, which include, but are not limited to, barracks-style housing for deputies and rent-controlled apartment housing.

Either way, it is going to cost us as a community – either through subsidizing this cost through our tax dollars or by mortgaging our level of safety in the streets due to the deputies who are no longer on the job.