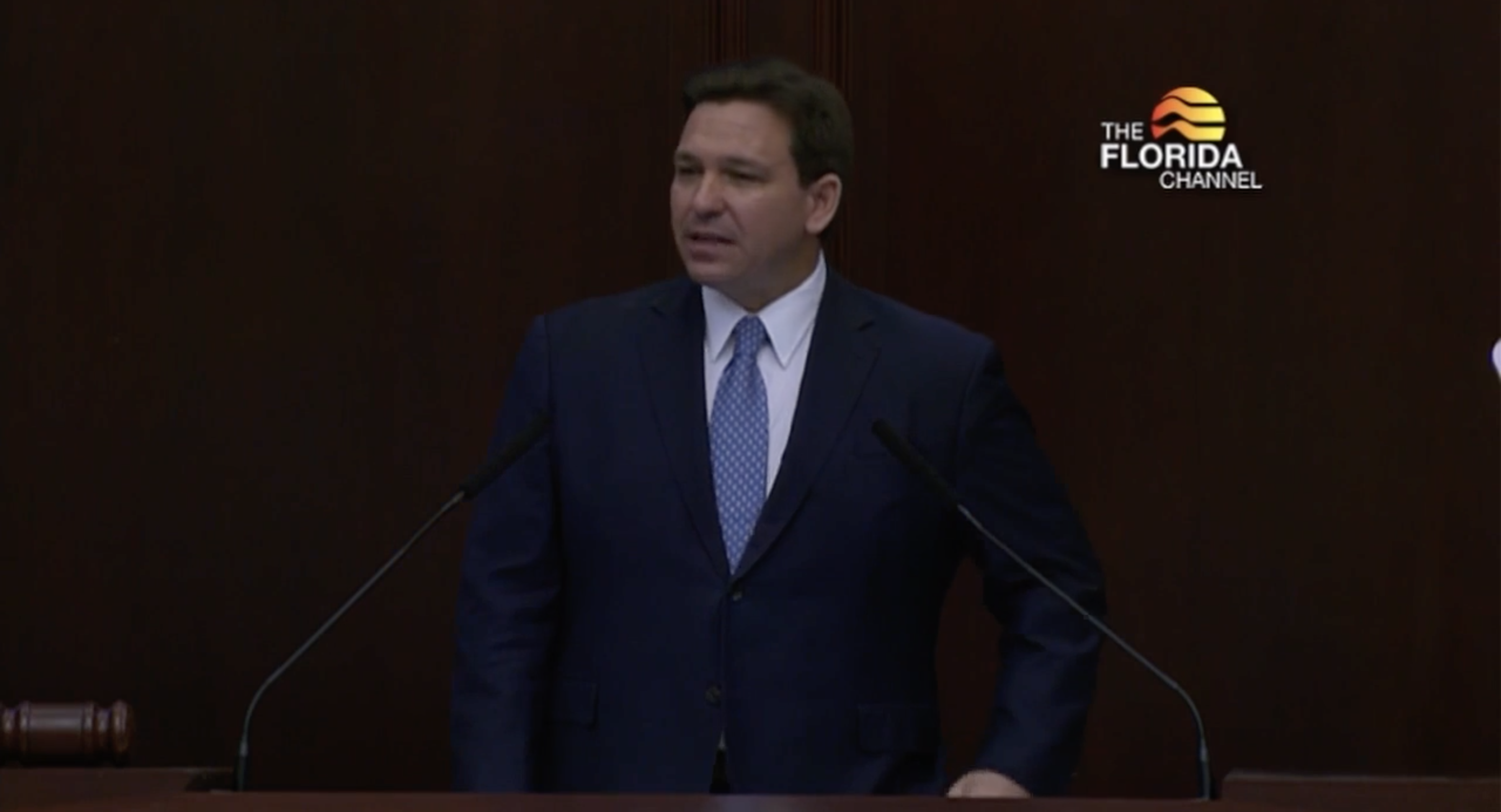 Governor DeSantis during his State of the State Address.

The Florida Legislature kicked off its annual session with a State of the State speech from Governor Ron DeSantis. The governor is facing re-election against State Agricultural Commissioner Nikki Fried and has been rumored to want a shot at the Presidency in 2024.

State of the State Speech

Democratic candidate for governor Nikki Fried watched quietly and intently as Governor Ron DeSantis gave his annual state of the State speech in Tallahassee to a joint session of Congress Tuesday morning. She was the only person immediately viewable to not applaud as the Governor went through a list of completed tasks and wishes for the next fiscal year’s budget.

You can watch the entire speech here and the Democratic response here – if you’re so inclined.

Or you can read this recap, which will take you a lot less time and give you the same amount of information. ????

In the 30 or so minute speech, the governor spoke approximately half of the time about issues of national importance, a nod to a potential 2024 presidential run. In the other half, he covered issues affecting the state specifically.

“The Freest State in the US”

Out of the gate, Governor DeSantis’ speech painted a juxtaposition of the state of Florida versus the states in the country run by Democrats.

The Governor told the joint session their work together had made The Sunshine State the “Freest State in the US”. The governor accused the federal government and ‘blue states’ of “consinging peoples’ rights to the grave.” Meanwhile, Florida had fought back against what he called a set of unconstitutional federal mandates. The governor compared Florida to an ‘escape hatch’ for Americans who wanted to escape restrictions.

The teleprompter then switched over to a discourse about mandates from the federal government. The governor labeled them as destructive and claimed that those enforcing them preferred “Fauci to The Constitution.”

The governor delivered good news about the state’s financial outlook: the State’s revenue generation in December of 2021 was $500 million above what it was forecasted to be. The budget the governor proposed stands at $99.7 billion, with $15 billion in reserves. The governor compared Florida to the rest of the country and said that Florida is on a much stronger footing than every other state in the union financially.

The Economy and Business

Governor Desantis harped on the fact that business creation was up some 61% in the state of Florida since he took office and called our economy the “envy of the nation.”

Gas prices have been a bone of contention for Republicans in Florida – the Niceville-Valparaiso area being no exception. Here in the Twin Cities – “I did that” stickers, featuring Joe Biden which point to the final gas price or the cost per gallon at fuel pumps, were on many pumps at the end of last year as gas prices hurdled the $3 mark.

Anyway, back to the speech.

In response to the situation, Governor DeSantis pitched an idea to the joint session that there be a $1 billion gas tax holiday in the future. No mention was made of President Biden’s release of the strategic petroleum reserve to ease gas prices.

The governor started this section of the speech by noting that Florida is, once again, the #3 state in the nation in K-12 achievement. But, he does want to see some modifications to the system as it stands now.

Thing one on his list – end FSA testing. According to Study.com, The Florida Standards Assessments (FSA) are “exams that measure whether students in the state of Florida are making progress in terms of curriculum standards set by the state, and examine students’ higher-order thinking skills.”

Students are required to take them throughout elementary, middle and high school. The tests are given to assess progress in a variety of subjects. The final FSA, in 10th grade, has some bearing on whether or not a young person can graduate from high school, according to study.com.

The governor briefly talked about a plan he has to replace FSA with periodic progress monitoring. He believes this will have better feedback for parents and asserts it will spark a reform in education more generally, with Florida leading the way.

Teacher pay has risen significantly under DeSantis’ mandate. Since 2019, the average minimum salary across the state has gone up approximately $6,000. The governor told the joint session it is his wish that the pay increases continue and that the bonuses that were doled out last year to teachers be repeated this year as well.

Finally, the governor covered his pet topic that has landed him in the national news multiple times – Critical Race Theory. The Governor said that he would like to see legislation that strengthens the so-called Parents Bill of Rights, which allows parents to review curriculum that is being taught to their kids in public schools. He assured his audience that he will fight to make sure that there is no “Critical Race Theory” being taught in classrooms.

Florida’s Public Colleges and Universities are number one again, according to the Governor.

He said that, despite these accomplishments, he is committed to rejecting any tuition increases or cuts to Bright Futures (the scholarships that are given to high school students in Florida who are academically high performing).

Governor DeSantis made it clear that he is passionate about supporting law enforcement as an institution and law enforcement officers as individuals. He said that Florida will not allow bail to be eliminated or prosecutors to be soft on crime and “ignore the law.” While not citing specific cities, counties or states – the governor implored the joint session to look at other places where being soft on crime “was disastrous”. He said those policies hurt quality of life for residents in the areas where that happens.

While the State of Florida has no land borders with other countries, Governor DeSantis made the issue of what he calls “open borders” a centerpiece of his state of the state speech. “Staggering amounts of illegal immigrants and narcotics,” he warned, are being brought into the country via the southern border Texas, New Mexico, Arizona and California share with Mexico.

The governor claimed, like he did in November, that the Federal Government continues to place undocumented immigrants into the state. This is true. According to CNN, 47 charter flights were made to bring undocumented immigrants to the Jacksonville Aviation Authority. These flights took place during both the Trump and Biden Administrations.

Governor DeSantis argued in his address that the State of Florida should take action against any company that helps the Federal Government move undocumented immigrants to Florida.

Additionally, the governor said that he is requesting, from the legislature, money to reroute undocumented immigrants from Florida to states with sanctuary city policies in place.

“It’s Orwellian doublespeak,” Governor DeSantis said, to not enforce voter ID “or have taxpayers funding elections.” The governor went on to bash the specter of ballot harvesting, which he believes looms large over the state. According to Dictionary.com, ballot harvesting “is most commonly used by critics of the practice of groups or organizations collecting and turning in individual voters’ completed election ballots. This practice is also referred to with the more neutral term ballot collection. The word harvesting is often seen as intending to imply that the practice results in (or is done as part of an effort to engage in) voter fraud.”

In order to protect the integrity of elections, the governor told state representatives and senators gathered to hear him that supervisors of elections must clear voter rolls regularly, people need to actively request an absentee ballot for every election and otherwise ensure that no illegal votes are cast.

In the same vein, the governor proposed for the budget what he called an Election Integrity Unit.

Florida has had several bills filed in the last couple of years to regulate or otherwise control the behavior of social media companies that have users in the State of Florida. Most notably, Representative Anthony Sabatini introduced a bill in the 2021 session that bars the deletion of someone’s religious or political speech by a social media platform and provides for a minimum of $75,000 in damages. The bill did not become law.

While not directly attacking tech companies for speech issues, The Governor cast a critical eye on the tech giants harvesting and selling of user data without what the governor called “affirmative consent” by users.

The governor did not spend much time on 2nd amendment rights during his speech – but did note that they needed to be continually defended.

While not bringing up aboriton explicitly, the governor did bring up issues ancillary to the pro life cause.

The governor implored the legislature to promote measures that would increase adoption and foster care homes.

A noted success for Life Causes in the state, the governor also announced that there are 4,000 more foster homes in the state than when he took office in 2019.

Democratic Response to the State of the State

In a speech a couple of English 101 students slapped together four days ago and left to mold in the speech refrigerator – The Minority Leader Evan Jenne regurgitated the same lifeless points with no nuance for about three minutes.

While most of the speech reflected the tweets of the Democratic National Committee, the Representative did make a Florida-specific point of some interest.

Rep. Jenne highlighted that Florida is still one of only 12 states that hasn’t accepted Free Money from the Federal Government. This rejection has to do with the fact that it is money to expand medicare in the state, money that President Obama offered. Governor-at-the-time Rick Scott rejected the money and subsequent administrations have done so as well to make a point.